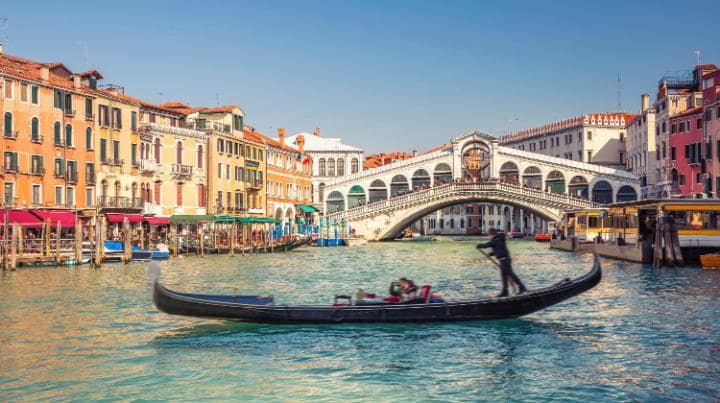 Venice is a name which you won’t feel unfamiliar. It is a city located in northern Italy. Too many titles have been added on this city such as “La Dominante”, “Serenissima”, “Queen of the Adriatic”, “City of Water”, “City of Masks”, “City of Bridges”, “The Floating City”, and “City of Canals”. The New York Times even described it as “undoubtedly the most beautiful city built by man”.
Venice is sinking

Our beloved city of water seems to be influenced largely by the global warming during recent years. As a matter of fact, this is not the first that Venice faces up with this flood problem, the city has a 1500 year’s history to battle with the wave starting from the collapse of the Roman Empire in the 5th Century.. However, in old times, the flood happened once or twice a year whereas now it happens every week. Therefore, you can even buy a pair of water-proof shoes from the ice cream vendors.

In old times, this kind of undesirable situation actually has brought Venice a lot of benefits. The city has become one of the most important ports along the Mediterranean Sea as it is surrounded by water and thus gets easy access to the sea. As a result, Venice has been one of the richest cities in the world by the 15th Century.
Between 1950s and 1980s, the city has sunk 20cm. 100 years ago, the time for the city to be covered by water in only seven days but now the number is shockingly 200; and Venice may only come across very high tides 5 times during one decade but now it seems that there were above 50 high tides only between 1993 to 2002.
Now when you come to visit Venice, you may need to find your way in the water because of the frequent floods. Even the Prime Minister Silvio Berlusconi has launched the anti-flood policy which seems to be the last chance to save our beloved city of water. Nonetheless, the anti-flood programme will be huge and complicated which may involve more environment damages.

The flood of tourists 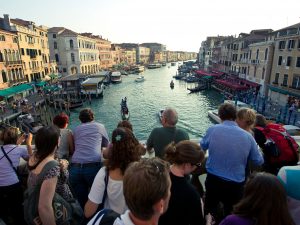 Although the city is endangered right now and everywhere is in the water even the shopping malls, it can not stop the flood of enthusiastic tourists. Venice is known to be one of the most popular tourist destinations in the world. It is estimated that there are almost circa 50,000 tourists per day and around 2.927 million tourists each year. The tourists are just like another flood to Venice.
When you come here, do not forget to try the canal which is the most famous transportation means here and can give you some unique experience.
Not sure if it is still a good idea to hire a car to explore a city, or maybe it is better to rent a canal. However, during the remaining 100 days when the city is not in the water, hiring a car is a good idea also. Car hiring companies like Avis, Sixt, Opodo, Enterprises, Europcar, Hertz, Carhiremarket, MyCarHire, and Expedia will take care of your car rental needs considerately.